The Killing$ of Tony Blair (2016) documentary by George Galloway 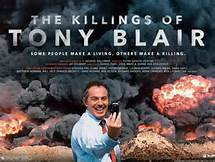 The story of Tony Blair's destruction of the Labour Party, his well-remunerated business interests, and the thousands of innocent people who have died following his decision to invade Iraq.


George Galloway is terrific in this meticulous demolition of Tony Blair


Some people make a living, others make a killing

George Galloway (born 16 August 1954) is a British politician, author, journalist and broadcaster who was a Member of Parliament (MP) from 1987 to 2010. He was formerly an MP for the Labour Party, first for Glasgow Hillhead and later for Glasgow Kelvin, before his expulsion from the party in October 2003,[1] the same year that he came to public attention for his opposition to the Iraq War. He subsequently became a founding member of the left wingRespect Party. He became the MP for Bethnal Green and Bow in the 2005 parliament.[2] In the 2010 election, Galloway unsuccessfully contested the parliamentary seat of Poplar and Limehouse.[3]
Galloway is also known for his vigorous campaigns in favour of the Palestinians in the Israeli–Palestinian conflict. He attempted to both overturn economic sanctions against Iraq in the 1990s and early 2000s and to avert the 2003 invasion. He is also known for a visit to Iraq where he metSaddam Hussein and delivered a speech, which ended in English with the statement "Sir, I salute your courage, your strength, your indefatigability."[4] Galloway opposed Saddam's regime until the United States-led Gulf War in 1991[5] and has always stated that he was addressing the Iraqi people in the speech.[6] Galloway is known in the US for his testimony in the Senate in 2005, where he turned a defence of allegations against him into an attack against US foreign policy.[7]