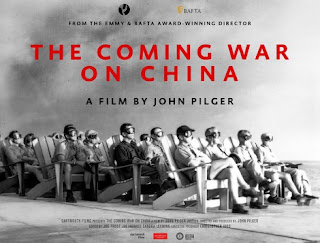 
"The aim of this film is to break a silence: the United States and China may well be on the road to war, and nuclear war is no longer unthinkable" - John Pilger


This new feature-length documentary by award-winning journalist and filmmaker John Pilger is his 60th film for television. Coming straight after the election of President Trump, the film is one of John Pilger's most timely and urgent investigations and is both a warning and an inspiring story of people's resistance.

Filmed over two years in the Marshall Islands, Japan, Korea, China and the United States, The Coming War on China reveals a build-up to war on the doorstep of China. More than 400 US military bases now encircle China in what one strategist calls "a perfect noose".

Bringing together rare archive and powerful interviews, Pilger reveals America's secret history in the region - the destruction of much of life in the Marshall Islands, once a Pacific paradise, by the explosion of the equivalent of one Hiroshima every day for 12 years, and the top secret 'Project 4.1' that made nuclear guinea pigs of the population.

Pilger and his crew chartered a plane to the irradiated island of Bikini where the 1954 Hydrogen Bomb poisoned the environment forever. He reports: "As my aircraft banked low over Bikini atoll, the emerald lagoon beneath me suddenly disappeared into a vast black hole, a deathly void. When I stepped out of the plane, my shoes registered "unsafe" on a Geiger counter. Almost everything was irradiated. Palm trees stood in unworldly formations, unbending in the breeze. There were no birds. It was a vision of what the world can expect if two nuclear powers go to war."

In key interviews - from Pentagon war planners in what is now Donald Trump's Washington, to members of China's new political class - Pilger's film challenges the notion of the world's biggest trading nation as an enemy.

The Coming War is also about the human spirit and the rise of an extraordinary resistance in faraway places. On the Japanese island of Okinawa, home to 32 US bases - where the population lives along a razor-wired fence line and beneath the screeching of military aircraft - Okinawans are challenging the greatest military power and succeeding.

One of the resistance leaders is Fumiko Shimabukuro, aged 87. A survivor of the Second World War, she took refuge in beautiful Henoko Bay, which she is now fighting to save. The Japanese government wants to fill in much of the bay to extend runways for US bombers. "For us," she said, "the choice is silence or life."

For almost a decade the people of Jeju have been peacefully resisting the base. Every day, twice a day, farmers, villagers, priests and supporters from all over the world stage a Catholic mass that blocks the gates. Every day, police remove the priests and the worshippers, bodily, and their altar. It is a silent, moving spectacle. Father Mun Jeong-hyeon, says: "I sing four songs every day at the base. I sing in typhoons - no exception."From Jeju, Pilger flew to Shanghai. "When I was last in China," he says, "the loudest noise I remember was the tinkling of bicycle bells; Mao Zedong had recently died, and the cities seemed dark, forbidding places. Nothing prepared me for the astonishing changes that had taken place."

He interviews Lijia Zhang, a Beijing journalist and typical of a new class of outspoken mavericks. Her bestselling book has the ironic title, Socialism Is Great! She grew up during the chaotic and brutal Cultural Revolution and has lived in the US. A critic of her own country, she also rejects outdated stereotypes. "Many Americans imagine," she said, "that Chinese people live a miserable, repressed life with no freedom whatsoever. The [idea of] the yellow peril has never left them... They have no idea there are some 500 million people being lifted out of poverty."

China today presents exquisite ironies, not least the house in Shanghai where Mao and his comrades secretly founded the Communist Party of China in 1921. Today, it stands in the heart of a very capitalist shipping district; tourists leave this Communist shrine with their plastic bust of Mao into the embrace of Starbucks, Apple, Cartier.

Eric Li, a Shanghai venture capitalist and social scientist, tells Pilger: "I make the joke: in America you can change political parties, but you can't change the policies. In China you cannot change the party, but you can change policies. The political changes that have taken place in China this past 66 years have been wider and broader and greater than probably any other major country in living memory."

The world's attention and fortunes are shifting east, and America's dominance is ending. Once subjugated, scorned and impoverished, China is rising inexorably as the world's banker, manufacturer and builder. Will all this be allowed to happen peacefully? "We need to make America strong again," says President-elect Trump. "We need to make America great again... and we need victories."